The pressure to cut contamination from private vehicles is mounting and electric cars seem to be the most viable alternative to this global issue. China has taken the lead, not only in terms of global production of the finished product but also in batteries and raw materials used for manufacturing. Where does this leave Europe and the United States in terms of leading this industry of the future? Here are some keys to the new map of power and interests regarding the electric vehicle. 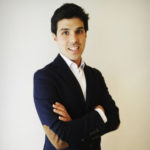 Carlos Martín is Project Director in the Ports and Logistics Consulting Area of IDOM. 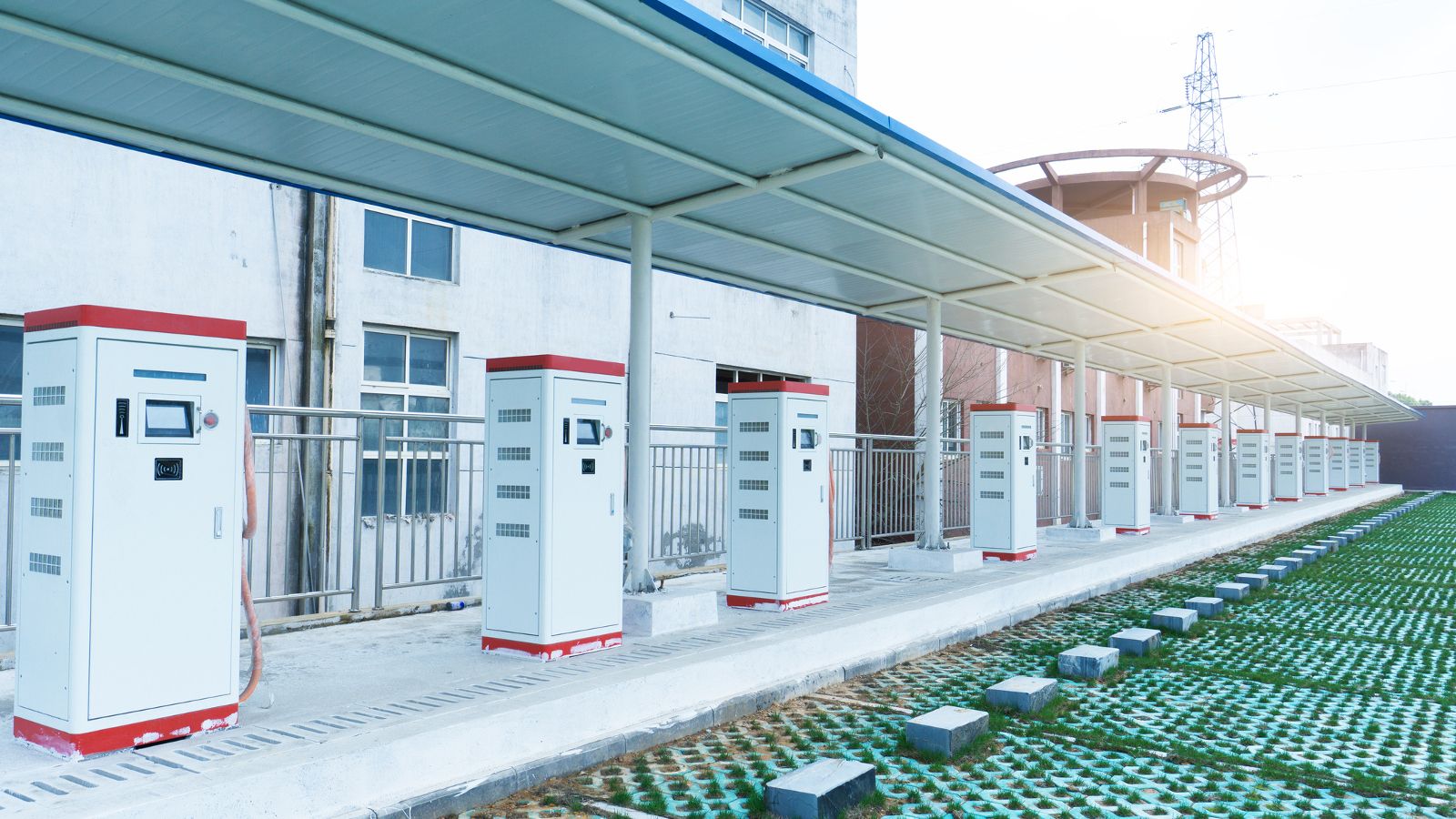 Charging stations for electric vehicles in China. [Image: WangAnQi / Getty]
China has positioned itself as the one to beat, willing to take control of the production and sale of electric cars, leaving Europe and the United States a distant second. Its strategy combines private initiatives from battery and car makers with financial and strategic backing from the government, which for 5 years now has been pushing an ambitious plan to transform the status quo in the automotive sector and the associated foreign trade relations, which encompass both raw materials for batteries and electric vehicles as well as the finished product. China is now the leading producer and commercialiser of electric vehicles. According to the China Association of Automobile Manufacturers, 680,000 light electric vehicles were manufactured in the country in 2017, plus 198,000 commercial electric vehicles, making it the number one manufacturer in the world. Since 2013, when China produced 23,700 electric cars, the industry in this Asian giant has seen year-on-year growth of 692%. 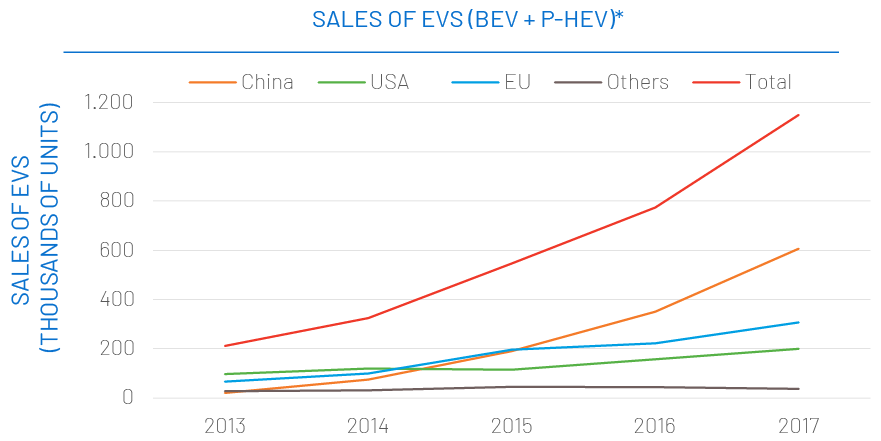 Plus, 606,000 electric vehicles made in China were sold in 2017, which accounts for 53% of the global market. Since 2013, the Chinese market has seen year-on-year growth of 733%. In 2014, China was already positioned as the top commercialiser of electric vehicles in the world, ahead of Europe and the United States. China's yearly growth, at a pace that its competitors can't keep up with, is down to several causes. Firstly, Chinese manufacturers are backed by the significant captive demand inside this Asian country. Plus, not only is the total volume of vehicles manufactured increasing, so is the range of models on offer. In 2017, Chinese buyers had 75 models of electric vehicles to choose from, more than in any other country. 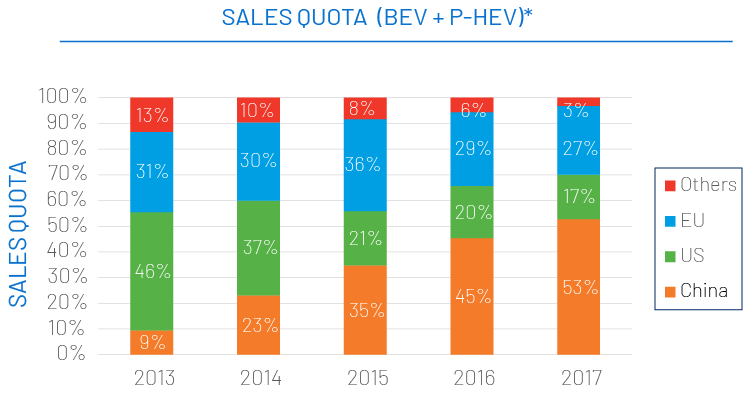 The Chinese government is responsible for both encouraging new models and incentivising demand, with subsidies covering up to 23% of the vehicle purchase price; tax and licensing breaks; and income tax deductions. Plus, the administration is investing in recharging facilities to make it easier to use electric vehicles. In 2016, China had a network of 107,000 charging points. 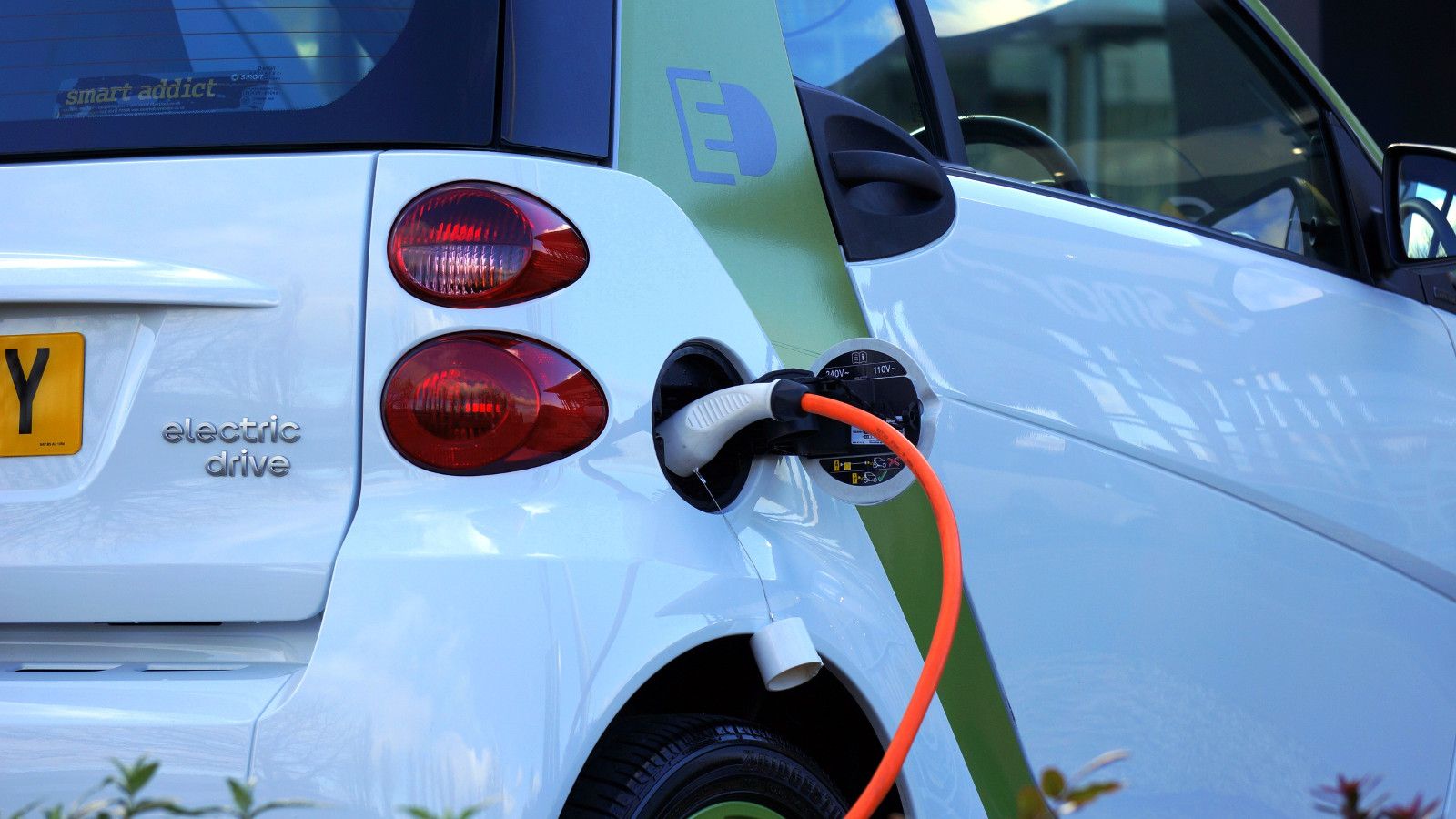 Demand to produce more and more

The off-the-charts growth in the production of Li-Ion batteries in China is down to two things. First, the government's strategy to promote battery production, imposing high production quotas on new companies looking to get into the national market. In 2014, China allowed national and international capital to be invested in battery manufacturers, which has fed the economies of scale and pushed down manufacturing costs. As a result, today China is the main supplier of batteries for electric-vehicle manufacturers worldwide. Secondly, and closely tied to the previous point, in 2016 approximately 90% of electric vehicles manufactured in China used batteries from Chinese producers. This means that the battery market needs the increasing demand for electric vehicles to stay afloat, and vice versa. This is the strategy both vehicle and battery manufacturers are using: by integrating both stages vertically, they eliminate the costs associated with spreading out the assembly process and get truly competitive end results.

China, South Korea and Japan have 8 of the top 10 battery manufacturers in the world, which in 2016 were responsible for more than 85% of production worldwide.

Europe and the United States have started to react to the threat that the market's total dependence on Chinese batteries could pose. So, in 2014, Tesla (USA) began collaborating with Panasonic (Japan) on the ambitious Gigafactory project (35 GWh/year). For its part, Europe didn't begin to take steps until 2017, when a budget was presented to create an alliance of EU producers (European Battery Alliance) in order to produce batteries in a unified manner (following the Airbus format).

The heart of the matter

To understand China's progress, we have to decode the international trade scenario for the raw materials used in manufacturing batteries over the past decade. Lithium, graphite, cobalt, nickel and magnesium are the main components of Li-Ion batteries. Both global demand for these materials and their price per tonne have increased considerably. In 2016, China was the leading importer of lithium, nickel, cobalt and magnesium, in addition to being the leading producer of graphite (used in the battery anode) in the world, with contracts in place securing the supply of raw materials to manufacture batteries for the next 5-10 years. The Chinese mining industry has seen a significant increase in activity over the past 10 years, over which time they have taken shares in foreign mining companies that operate in strategic locations.  With the strategy of controlling the supply of raw materials to manufacture batteries, China is limiting real competition and access by battery manufacturers in the US (Tesla), Japan (Panasonic) and South Korea (LG Chem), among others.

In 2016, China was the leading importer of lithium, nickel, cobalt and magnesium, in addition to being the leading producer of graphite.

Supply-chain integration, mass production and government support have allowed China to cut manufacturing costs on batteries to a level that is out of the question for battery makers in Europe and the United States today. In 2017, 55% of Li-Ion batteries came from China and just over 1 in 2 electric vehicles sold in the world were made in that country. Over the coming years, we will see how the new map of power, interests and influence in the alternative-fuel automotive industry evolves. For now, it opens up a series of questions: Will China's market share continue to increase, making it the main exporter of electric vehicles to the rest of the world? Where will this leave Europe and the United States? Will the European Battery Alliance be able to compete with China in the Li-Ion battery market or will it have to look to other models?

MobilityEnvironment
How Can Port Terminals Be Adapted To Electric Vehicles?
by Carlos Martín