Truck platooning technology is destined to revolutionise logistics, optimising land transport, economising on fuel and decreasing hazardous emissions. Clearly, this will also have an effect on port facilities, which will have to adapt to this new type of semi-driverless lorry. 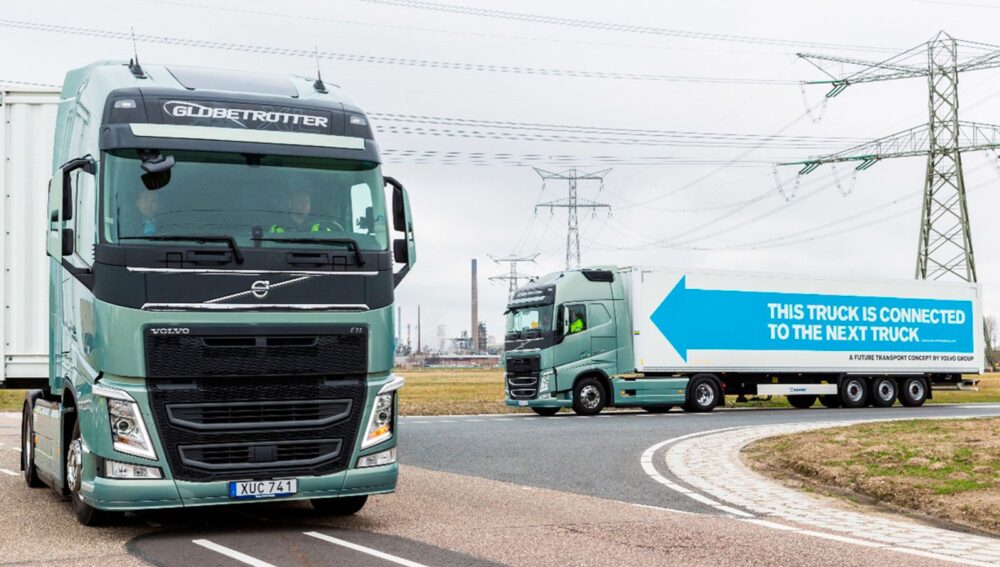 But what do we mean when we talk about truck platooning? It is a group of interconnected lorries travelling one after the other, in a sort of convoy. The vehicles communicate with each other and the surrounding infrastructure along a specific route, coordinating braking and travelling at a constant speed. This technology helps cut costs (both on fuel and human resources), boosting traffic flows and safety in the port environment. It may be one of the types of technology, along with the gate appointment systems, that will resolve the traffic issues (and their environmental effects) at container terminals.

These semi-driverless lorries can communicate V2V (vehicle to vehicle) or V2I (vehicle to infrastructure), or a combination of the two. Systems with vehicle-to-vehicle communication use Wi-Fi connections, radars, front and rear cameras and real-time videos to guide these convoys that are interconnected virtually, travelling with a separation of just 10 to 15 metres between each vehicle. 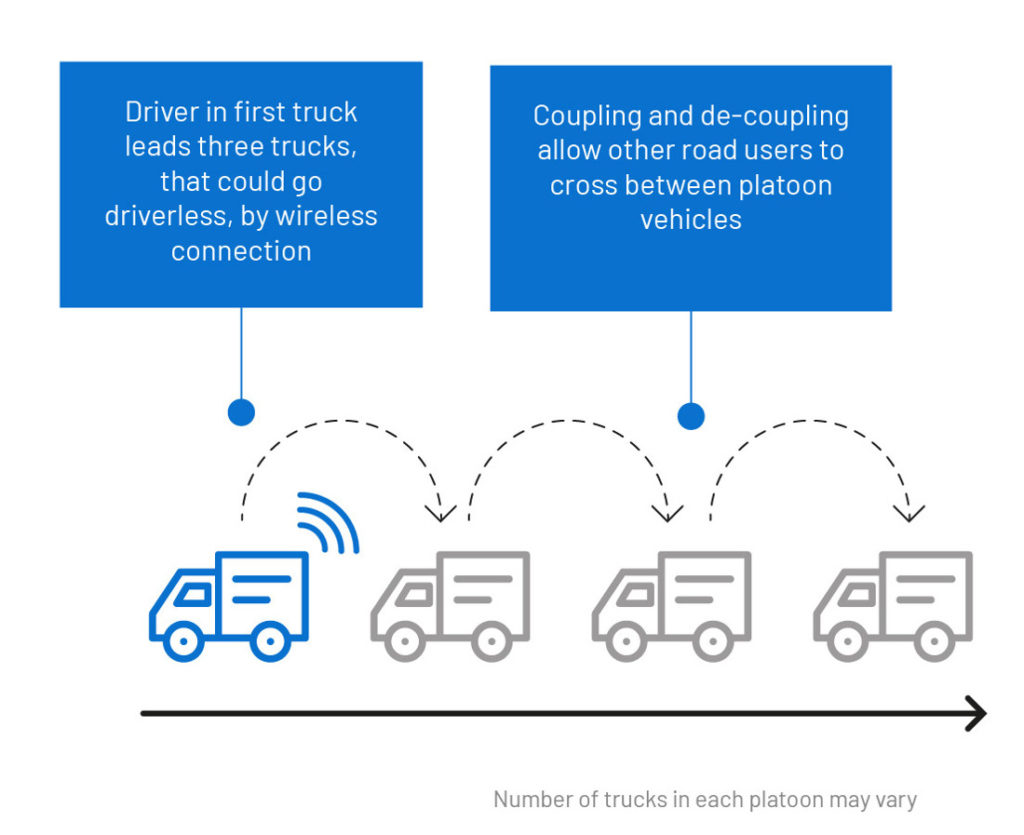 Truck platooning is a group of interconnected lorries travelling one after the other, in a sort of convoy. The vehicles communicate with each other and the surrounding infrastructure along a specific route, coordinating braking and travelling at a constant speed.

The main benefits of truck platooning

According to ACEA, the European Automobile Manufacturers Association, the advantages of platooning can be broken down into four areas: the environment, road safety, supply chain efficiency and, finally, benefits to companies committed to this technology.

In terms of the environment, the system is calculated to reduce CO2 emissions up to 10% over transport with conventional lorries (as mentioned, this is due to travelling at a steady speed, with less braking and accelerating). This efficiency is also due to the fact that the vehicles behind the lead lorry take advantage of its slipstream (like cyclists in the peloton), which also helps save fuel. This reduction in fuel use and emissions is nothing to sneeze at if we consider that cargo transport is responsible for one fourth of all greenhouse gas emissions in Europe and the main cause of pollution in cities. Moreover, this sector has seen the smallest drop in emissions in recent years.

Regarding safety on the road for drivers and cargo, automation of driving and braking reduces the driver's reaction time to zero, also eliminating other risk factors associated with human error, such as fatigue and distractions (the human factor is responsible for 90% of road accidents). It is also a commitment to efficiency, as it optimises road transport, preventing traffic and tailbacks. All of these advantages benefit the companies and organisations that choose to use platooning, plus the fuel savings (which is estimated to make up 30% of lorry transport costs). It also improves conditions for drivers, who can do other tasks while in automated lorries (reducing stress and tension levels). The data mentioned comes from a study conducted by Dutch consultancy firm TNO on this type of transport. 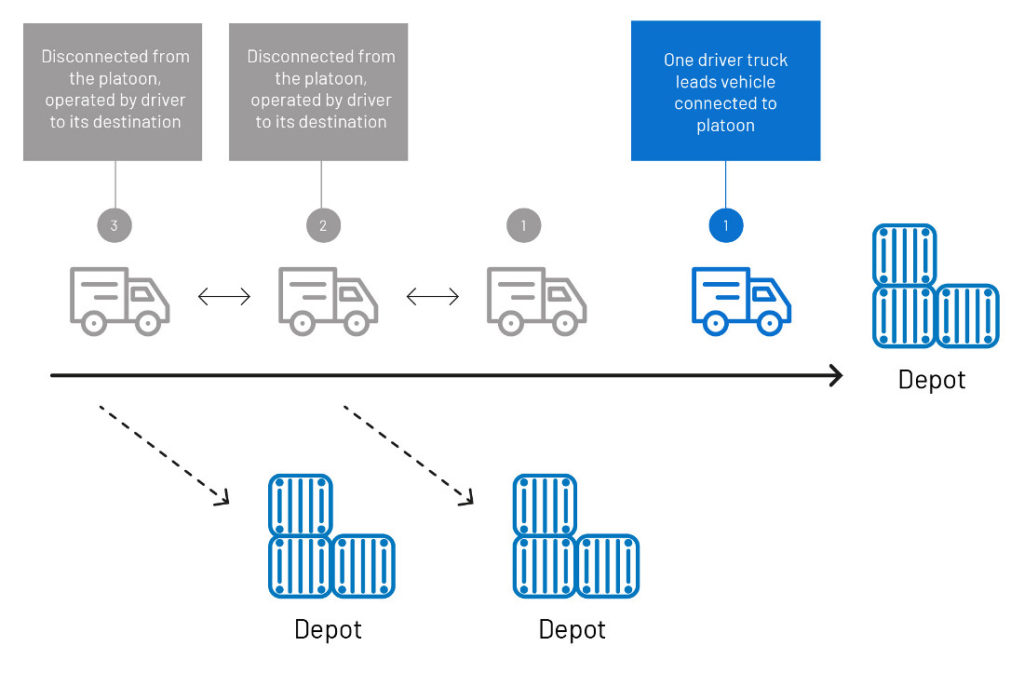 The system is calculated to reduce CO2 emissions up to 10% over transport with conventional lorries due to travelling at a steady speed, with less braking and accelerating.

So far, several tests have been done on this technology in Europe. In 2016, the Dutch government organised a challenge for lorry makers like Volvo, Daimler and Scania. A dozen lorries from the aforementioned brands travelled from their factories to the Port of Rotterdam, nearly 2,000 kilometres and crossing four European borders, in a test that, while successful, doesn't seem to have served to promote habitual use of this technology.

Nevertheless, the EU initiatives continue. So, the Ensemble consortium has been set up, bringing together several companies (DAF, DAIMLER, IVECO, MAN, SCANIA and VOLDO GROUP, which includes lorries manufactured under the brands Volvo and Renault) that are committed to making sure truck platooning is soon a reality and that their vehicles are inter-compatible in this sort of convoys. The project, which kicked off in the middle of this year, will continue for the next three years. In the first year, the consortium will focus on classifying and defining the requirements and developing a benchmark design. This design will be developed and implemented in vehicles manufactured by the brands participating in the consortium. The multi-brand platoons will be tested in the third year on various European roads.

More recently, at the Experience Week Connected Transport, held at the Port of Rotterdam in early October, 250 tests were conducted with connected convoys on routes travelling through the cities of Helmond, Tilburg, Moerdijk, Roosendaal, Aalsmeer and the area of Rotterdam/Maasvlakte. 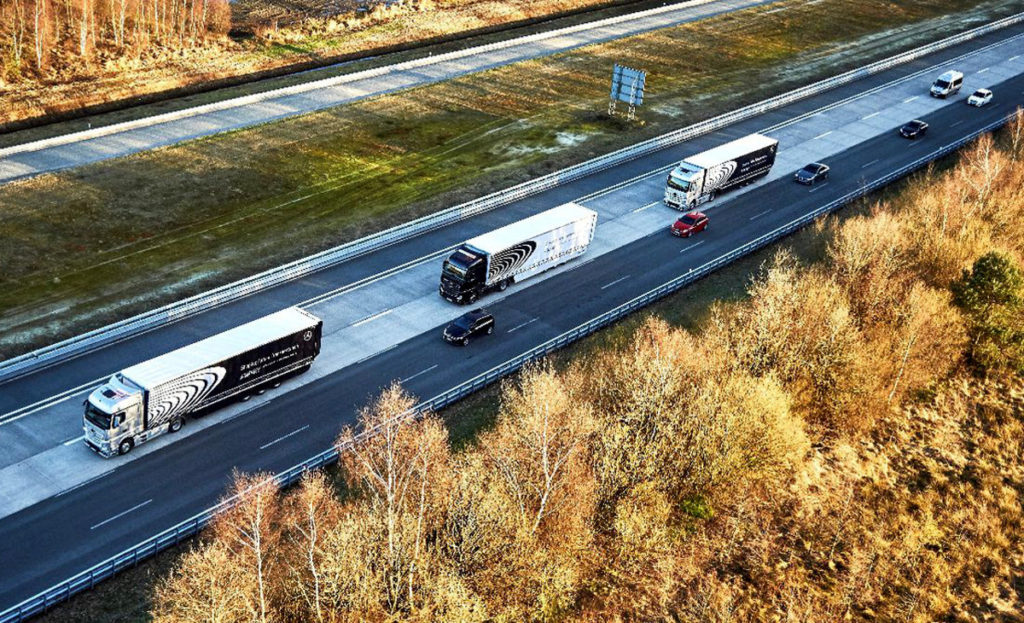 The Ensemble consortium has been set up, bringing together several companies that are committed to making sure truck platooning is soon a reality and that their vehicles are inter-compatible in this sort of convoys.

On the other side of the pond, last summer, in the United States, the North American division of Volvo, in collaboration with the transport and courier service company FedEx and the North Carolina Turnpike Authority (which manages toll roads in that state), tested a convoy route with three interconnected lorries travelling at a steady speed of 100 km/h with a time difference of 1.5 seconds and travelling closer together that is normally seen for lorries on motorways.

Repercussions for the port environment

Implementation and the progressive popularisation of this technology would have a direct impact on ports, beyond the aforementioned decrease in traffic at terminal entrances and port surroundings. Container terminal activities could be better scheduled and planned, above all the arrival and departure of lorries, with greater precision than the Gate Appointment Systems, and inter-terminal transport would also become more efficient. Additionally, by knowing the exact order of the lorries arriving ahead of time, the location of the containers at the terminal could also be organised, saving time spent searching for and repositioning them on arrival. 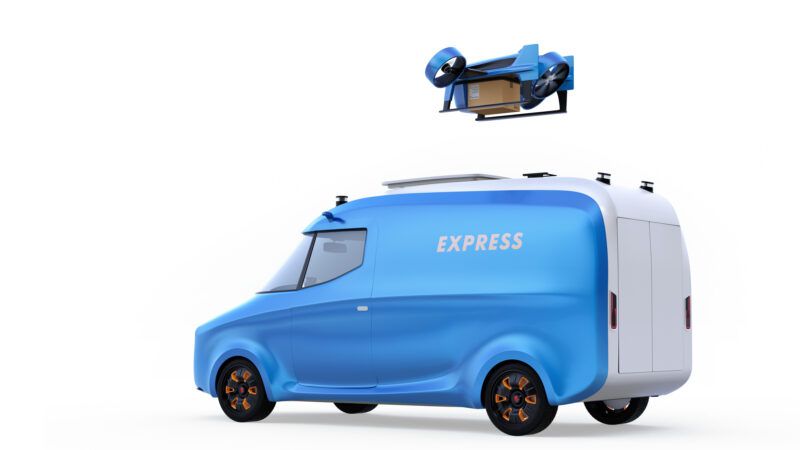